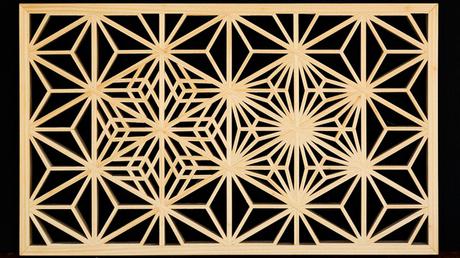 THIS COURSE IS ONLY FOR PEOPLE WHO HAVE DONE THE BEGINNER’S & INTERMEDIATE COURSE WITH DES KING!

Hexagonal asa-no-ha base with kawari yae-zakura and yae asa-no-ha features.
This three-day advanced course takes your kumiko skills and the hexagonal patterns to the next level. However, you must have completed the previous intermediate course before participating in this course.

In this class, you will reinforce the skills you gained in cutting the mitsu-kude three-way joint, making up the hexagonal jigumi (lattice) and attaching the tsukeko frame, and trimming and fitting the asa-no-ha pattern. That gives us the base for two spectacular patterns — the kawari yae-zakura and yae asa-no-ha. And there is also a third pattern hidden in there which we cover in this process.

Both of the new patterns require joints cut at an angle in the thinner pattern kumiko, and the yae asa-no-ha also involves yet another mitsu-kude joint, but with the experience gained over the two previous courses, you’ll be able to tackle this with complete confidence.

The skills you develop from these two patterns will open the door to a vast array of stunning patterns that you can combine and incorporate into your own furniture or art designs.

This is where the real fun with kumiko patterns begins!

TESTIMONIAL
I have admired this Japanese art form since I was a child when I saw some cabinets in an exhibition at the museum- at least I think they were cabinets.
While I did not produce the lovely neatest work of the group, I was well pleased with my efforts and I am very proud of my 2 completed samples.
Des is a terrific teacher and he was very generous with his knowledge and experience, especially on the subject of jigs.
I am so pleased I participated in the course and I am now very keen to have a go at more and improve my skills.
Thank you Des, Shinobu and MGFW.

Cost
$1040 (2020) (Inclusive of GST)
All materials included, catering for morning tea, tools (students will be required to provide some basic tools for themselves), and the full set of layout, sawing and shooting jigs used on the program

About the Instructor: Des King 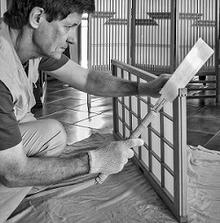 A former Australian Army officer, Des first came into contact with the Japanese culture when he was selected to
attend a 12-month intensive Japanese language course at the then RAAF School of Languages at Point Cook in
1974. In 1978 he was sent to Japan by the Army for advanced Japanese language studies, consisting of one year
at the United States Department of State Foreign Service Institute in Yokohama, and one year in the Office of the
Military Attaché at the Australian Embassy.

Des left the Army at the end of 1986, eventually moving to Tokyo to live, and work as a free-lance Japanese-
English translator. He continued translating business after his return to Australia.

Woodworking had been growing into an increasingly serious hobby for quite some time, and in April 2008, Des
began a 12-month post-graduate course in tategu (production and fitting of doors and windows, and especially
shoji) at the International College of Craft and Art (Shokugei Gakuin) in Toyama, Japan. The course was entirely
in Japanese, and comprised mostly practical work, with only a limited amount of theoretical studies. After
building the foundation in making shoji, Des turned his focus to the intricate patterns that can be made by
kumiko within shoji. This became the central theme of his work.
After completing the course in March 2009, Des returned to Australia and set up a workshop in the Gold Coast.
Des has published three books on making shoji and kumiko patterns, and is currently writing and making
patterns for his fourth book.

Fill out my online form.